Free Only Until Tomorrow

Get your copy of "MarcoAntonio & Amaryllis" free until tomorrow only! If you haven't savored the ecstasy of why love is the result of all things conquered then you should pick up this book. Here is a quick look inside. 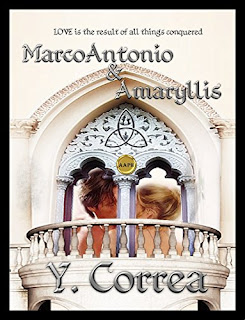 The year 1585. The Anglo-Spanish War. England’s greed for Spain’s crops, land, and supplies gives birth to the inertia of intolerance on both sides. Yet, even then, Love surges forth.

MarcoAntonio, a Spanish gentleman and knight, defied all boundaries of color and culture, when setting eyes on the English lady Amaryllis. Although to others, he may be a bit reserved, he dares to lower his defenses solely for her.

Amaryllis is an English lady. One with an open heart, gentle spirit, and shining eloquence. She knew that she should not desire MarcoAntonio. Still, a love feeling so right couldn’t be so horribly wrong!

Discover why their LOVE is the result of ALL things conquered!


“Amaryllis! What are you doing?”, his voice was dry, raw, and unemotional.
“Nothing father. I just stepped out to get some fresh air,” Amaryllis quickly walked back into her room. She could hear her own insecurity in her voice, and her heart thumped in her ear, and she was certain that her father also noticed her nervousness.
“Are you sure?” his eyes became hard with suspicion. “'Tis not like a lady, to walk about gallivanting in the middle of the night, when she is well aware that there are putrid, Spanish vermin, running about looking for an opportunity at infringement,”
“Father, I was not gallivanting about. You do not trust in my word? I was just out on the balcony getting some fresh air. As you must know, it gets stuffy in here at times,” she was trying hard to hide the fear in her voice.
Her father squinted his eyes to a mere sliver, “Very well,” then turned his back to her and commenced his march out of her room. However, just before leaving, he left her with just a few words “Why would one ask if one is not being trusted, unless one would have a reason to ask such a question?”, then while closing the door behind him, he spoke for the last time “Good night, child.”
This time feeling her knees knock together, and certain that her fear was obvious, she spoke quietly, “Good night, Father.”

MarcoAntonio had departed just in time. Had her father walked in just a few minutes earlier, that would have been the end of MarcoAntonio, and in turn, of her as well. He was so stubborn, she thought. Just like a Spanish man! Then again, just like an Englishman as well. As a matter of fact, she knew not of any man that was not as stubborn as a mule. At least MarcoAntonio made being stubborn, cute.
She was so madly in love with him. Even from the moment that she first met him at the market.
They'd just arrived here from England—her family and herself. Her mother decided that she wanted to shop in the Spanish market for some things, which in her mother’s language meant that she simply wanted to spend money.
As they browsed along, when Amaryllis turned to look at some baskets, there he was. Standing like a soldier on guard, just behind a sweet older lady. His mother, Amaryllis found out in time.
They had money. Lots of riches. Yet, his mother was so settled in her ways that she refused to retire from her employment. Whatever that particular employment would be, at whatever given time. That day in specific, it was basket selling.
Amaryllis, looked up at him, and he gazed upon her, and that was it. That was all it took for both of them to know that they wanted to be together forever. “Love at first sight”, indeed.

GET YOUR FREE COPY TODAY AT THE LINK BELOW!