Bringing Some Things Into Question

Like so many of us, I was brought up in a religion that ground it into your head that "the gays" and their liken were the spawn of the devil and they would be—just like Sodom and Gomorrah—burned.

My question is, why so much hatred?
Why, exactly, other than "such and such/so and so says so"?

Today, I dedicate this post to my kids, first and foremost, and then to all of those whom have lost their families simply because of their sexual orientation, or gender identity.

In celebration of National Pride Month, please know and understand that I am a proud ally.

Let me start by saying that there are so many threads to what I want to say; so many variables that play into this thing called LGBT+ Pride and what it means to me. It's hard for me to decide on where to begin.

Nevertheless, as the old adage goes ... I'll start at the beginning.

All righty, so ... I can only speak for myself.

Since that's the case, I will talk on my experience as a person and individual in a world full of all kinds of residents. 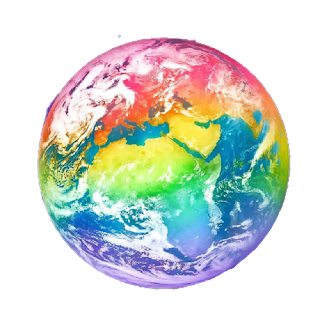 Perhaps it was my tumultuous upbringing, or maybe it was that at my core I was always a being of light and love ....

Whatever the case, I cannot say, but I never seemed to be one who formulated bigotness or prejudices of people based on skin color, accent, religion or yes ... sexual orientation or identity.

As a little kid, at my earliest age, all I cared about was being around people that were kind and nice to me. Their "looks" or what they sounded like had very little to do with my impression of them.

In my later years—and because of the influences that surrounded me—I did begin to "see" differences in people. In the way they looked, sounded, acted, things of that nature.

For example, my mom's little sister seemed more (in the way that I would have described it back then) "manly" than my mother. To add to this, she also had a lady that lived with her, and they were always very caring around one another. Furthermore, I noticed that my parents didn't care too much about that. I, on the other hand, didn't really care. I loved my aunt, liked her friend, and had fun playing with her friend's twin daughters.

In my pre-teen years my mother explained that to me as my aunt being 'funny like that'. So I asked, "What do you mean by 'funny'?"

Her answer was, "Well, you know how ladies like men?"

I shrugged, "Okay," and carried.

Right around this time was when my parents' found Jesus and all-out havoc was thrust into an already ass-backwards, chaotic existence.

So much happened in that time.

Even the proverbial, them (the preachers) trying to rebuke the devil of gayness out of some individuals. And whenever that devil wouldn't leave, these people were told that they had a stronghold that they weren't working hard enough to cast out and put in God's hands.

Please keep in mind that this is just one of many myriad prejudices that this church attempted to instill into its followers.

I always cringed at the exorcism sessions when the person carrying the stronghold on homosexuality would contort and convulse on the ground as preachers tortured them with holy oil/water and bellows of expulsion.

No words can really explain the horror. It was truly awful.

It never sat right with me because on the every day these people that were supposedly demon-ridden were beautiful people. Lovely, kind, warm people.

So, I befriended them, even if no one else would.

Many years later, I am proud to say that I am the mother of (starting from oldest to youngest) a bisexual daughter, a gay son, a lesbian daughter and an a-sexual developmentally disabled son.

I carry that as a badge of honor.

Not because it is "trending", but because I feel like the Universe found me worthy enough to gift me these kids because it knew that they would ALWAYS have someone to lean on in times of need. Even if the whole world turned back on them.

To add to the aforementioned question is this one ....

If the basis of religion, at its core (apart from the logistics of varying beliefs), is for us to be good human beings, then why are you so cruel to others?

After all, aren't they too living, breathing, human beings just like yourselves?

I've heard so many responses.

- "You either believe what the word of God says or burn in hell, no excuses."

- "God is a God of love, but also righteousness!"

- "I'm no one to judge, but I am just repeating what the bible/torah/whatever holy book says."

Oh, boy, the list goes on for ages. But we preach so much hatred. Why? Honestly, why?

Look past that which you cannot understand, and that which might scare you, and into the soul. Inside the human sole you will see that we all have the feelings and fears. We all have hearts that beat, and veins that bleed. We all know how to love, and how to hate.

Some will look at this post and decide that I am a sheep gone astray, confused, a vagabond sinner, an agnostic or a atheist. They may want to pray for mercy on my soul, or decide that I am a lost cause. Whatever you decide, or whatever notion you come to is your own. I won't try to change your mind.

I am at peace within myself, and in my heart that I, (1) believe that love is love. (2) will stand by any LGBT+ individual that just wants to live the same old boring life that we all do. (3) Will always love my children, even if they decided the were straight tomorrow. And (4) that I have a heart and soul full of spiritual fulfillment and flourishing.

So to those who just can't see past the tips of their own noses as it pertains to their stance on LGBT+ Pride and supporting it, I dare you to:

1. Put yourself in the shoes of the person you are judging so harshly—set your narrowmindedness and pride aside and just be human for once. See that no one would voluntarily want to put themselves through the horror of prejudice and bigotry for the sake of "fun".

3. What is it about LBGT+ individuals that scares you so much or offends your masculinity/femininity? How does "their" (saying it with sarcasm) existence hinder yours?

Maybe, just maybe, consider that if you stopped condemning other peoples sexual orientation or identity as part of your religious beliefs you might find peace in this little world.

Bringing Some Things Into Question

Like so many of us, I was brought up in a religion that ground it into your head that " the gays " and their liken were the spawn ...