Today C. Desert Rose is releasing her brand new paranormal comedy "Hairy Situations". I can guarantee that it's a hilarious story.
Anywho ... I'm letting go of the mic and letting Rose fill y'all in. 😊

I admit, sometimes these random story ideas just pop into my head out of nowhere. I could be just sitting there minding my own business when a brand new character yells into my ear. This happened when I wrote “Nethanyel’s Lady Lune”, “From When Jasmine Blooms”, and now with “Hairy Situations”.
What is “Hairy Situations”, you may be wondering? Let me take a moment to fill you in.


The long and the short of it is that “Hairy Situations” is a Paranormal Comedy. A spoof on the quintessential and beloved Vampires and Werewolves.
What was really interesting was the progression of events that lead to the final product.

I had just gotten done with a long day of work and laid in my bed to relax for a little bit. Instantly, I heard the voice of the main character, speaking in first person, say this:


"Okay, so this is going to sound crazy ..." I braced myself before finishing. "I'm a werewolf."
"Oh. Okay." Silvia nodded, her bottom lip in a pout. No sign of question, concern or insecurity on her face. Acceptance; that was it.
"Did you hear what I just said ...?" I asked, confused as to her reaction.
"Mhm, yep." Still nothing.
"I just said I am a werewolf, Silvia. I'm serious. I, like, mean it. Not kidding."
"Okay." She replied. No change, no denial, no inkling that she thought I was crazy.
"Silvia ...? Seriously?"
"Rogg, dude, I heard you the first time! Now you're just irritating me."
"You're just accepting it? Just like that?"
"Yes! For the love of God! What do you want from me?"
"Oh, I don't know ...! An accusation of insanity ... A recommendation to a psychiatrist ... An offer of medication ... Shit if I know!"
"Rogg, are you seriously mad at me for NOT overreacting? Are you listening to yourself?"
I paused for a moment. She wasn't wrong. "Roger, I have seen enough paranormal movies and TV shows to teach me that denial is a feeble concept. It's easier to accept and move on. Now, can we please move on?"
Well shit, I couldn't argue with that logic either. And here I was preparing myself for the worst. Who knew? Finally resigned, I shrugged.


I thought it was hilarious. Could you imagine a movie starting like that? It would be incredibly fun. Before I knew it, I was writing down the lines. Just like that the words flowed. I finished the entire novelette in three days.
Roger, the main character who is also called Rogg (with 2 Gs) is basically a loser. In a tight position monetarily speaking he chooses to tell his secret. It would be the only way to get the much-needed funds. Basically, his choices were “tell it all” or “get evicted”. He chose the former.
In comes Silvia, the journalist for a newspaper called The Harbinger. She was sent on a mission by the Editor to look into the story and see if there was any value in it.
In no time at all Silvia finds herself complete sucked into the fantastic misadventures Rogg has braved throughout his life. “Is it real or make-believe”?, Silvia wonders. More than that, she is downright outraged at the ungodly and extraordinary calamities of Roger’s life.

That’s all I am going to say about that. Just know that if you choose to delve into “Hairy Situations” you’re going to laugh out loud. This is not your ordinary paranormal fiction. 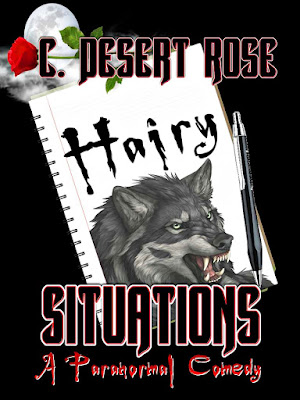 
Roger is at his wit’s end ...No family, no friends, no home, no money. He has one last resort ... tell the truth. Calling the local newspaper, The Harbinger, Roger does a "tell-all" story. Silvia, the journalist, is keen to find out more about this so-called werewolf. Before she realizes it, she is sucked into a tale that enthralls her completely. A comedy. An adventure. A really fascinating memoir."Hairy Situations" is guaranteed to keep you absorbed and make you laugh out loud.