I was luck enough to be the last one to be featured during this week long blog tour. Because of it, I thought I would speak a little bit about what makes me different. Here you have it.

For a long time I thought that being different was something to be frowned upon. Then I created All Authors and through those means was able to connect with others who considered themselves different. Now, being different is something I revel in, and of course, condone.

Please, by all means, be different! Different is GOOD!

Truth be told there is more to it than meets the eye. Please permit me a moment of your time to tell you the short story of my divergence.

Once upon a time, I was a kid growing up in the hood. Due to several family chemistry elements, I was not allowed to be who I truly was. And who I truly was, was vastly different from the ambiance that surrounded me.

At a very young age I struggle with dyslexia that remained unaddressed for many years. But that did not take away from me love for books which consequently started very early on as well. My love for books started with the library. Whenever I entered this magnificent place, it was like walking into my dreams. Picture books were my favorite as they had very few words.

In time the romance with literature grew as did I.

I never really fit in, as a child. It had much more to do with the function of my mind than anything else.

Through a series of disappointing events I eventually became the person I am today. And guess what? I wouldn't change a thing. Because while the quest to self-discovery led me through some unappealing roads, it also served to teach me that what made me different from most was also my strength.

The very same challenges that subsequently molded my person also established the firmament of my art.

I take irrevocable pride in my divergence for it speaks in volumes to the public that I am not just “another writer”. Writing is in my blood. It was what I was always meant to do. Who I was always meant to be. I don't just tell stories, I create an experience, and I love every minute of it.

“A wistful ghost, was she. Enraged, defeated, perpetually ponderous, she felt. How could this have happened? Rage consumed her to the point of paramount eruption. Who did they think they were? No one! No one had ever done such a thing to her before! Vagabond she hazed the Netherworld, back and forth, forth and back—as though she were unable to do anything else. Of course, she was unable to do anything else in the bleak, lifeless place. The only thing her infuriated persona was capable of doing was pacing and waiting.”


“Wispy ringlets danced in the sky in a million different colors—some unrecognizable. Soft blue and majestic puffy cotton-balls filled the space behind it. A backdrop of celestial azure with a rainbow of circles aplenty curtaining atop. A single sphere of bright light swayed to and fro above it. A luminescent orb with a life of its own.”


“Pivoting on her heels, Genesis turned to face the long, empty expanse ahead of her and walked away. Her hips swayed as she ambled forward, like a nymph, precision and allurement absolute.”


“Then the dream—the memory—took on an ominous milieu. Dark, calamitous, eerie, hitting Lilith’s cerebra in horrifying palpitations.
Blood.
Screams.
Lilith on top of Randolph.
More screams.
Warm solvent running down her chin.
The taste of cloying amrita.
Blood everywhere. On the ground, on the walls, spattered in every corner of the expanse.
Randolph, pale and limp, eyes open yet lifeless.”

The day that the vice president of All Authors created “Divergent Ink” and told me about her idea, it was like music to my soul. I simply could not say no to the venture. I saw this as the opportunity to give the world a taste of our collective hearts, minds and spirits. I was, without a doubt, beautiful to me.

Writing “Nalani at Heaven's Gates” in order to give my answer to the theme question, “Where is paradise?” was so gratifying. You see, after many years I have learned that my personal paradise is being exactly who I am, exactly where I am. 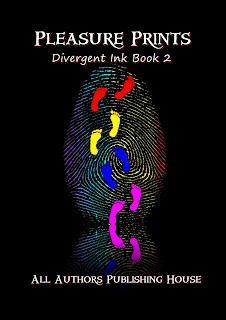