As of today "Dimensions of Literary Seduction" is available for pre-order. Come and order your copy today or help spread the word. 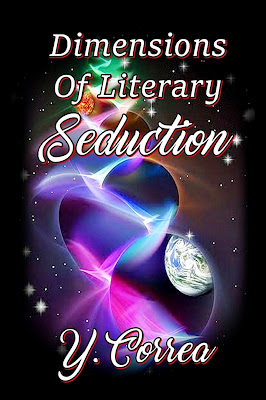 Y. Correa is best known for her approach to narrative and her ability to “romance the words”. In this short story anthology named after her catchphrase, the reader will savor the lusciousness of titillating wordplay and engrossing storytelling.
Broken up into two segments, Science Fiction and Contemporary Fiction, readers will enter the universe of Y. Correa’s prose—a place all its own.

Take a break! A break for a short story. More than that, take a trip! A trip into the seductive multi-genre dimensions of Author Y. Correa.

G was fascinated with the way the little people which he created moved around unaware that he was the manipulator at the controls of their lives. He the master and they the puppets. As G swiveled the mouse back and forth, he watched attentively as the avatars came alive. He was fascinated by it all. These things always reminded G of the complex things in life. As he fiddled with the little people of his own formation G speculated about love, science, religion, and things of the sort. Being the nerd that he was, the unexplained always intrigued him. Especially, the thought of God and the discovery of the god particle.

The announcer’s voice blared loudly through the speakers of the virtual reality billboard. 3D images of him bounced off its pavement and sprang to life. His movements seemed so real that anyone could easily mistake the digital reality for a real person. The announcer’s hair was slicked back and dark, held by a bit too much hair-gel and he wore a notably expensive Armani suit. A wink and a brilliant smile with a twinkling tooth preceded the announcement. Some of the passersby stopped to look, others ignored the billboard altogether.

Are you tired of being normal? Tired of always fitting in? Tired of being just another jellybean in the bag? Are you sick of not being pretty enough, smart enough or strong enough?

Try Genomegenics. Our specialized laboratories can not only make your dream of being extraordinary come true, but they can make it happen without the need of cloning or rebirth.

What is a genome after all, if not a cell that can be moved or replaced?

Then don’t wait any longer. Genomegenics is waiting for you!

The narrator put special emphasis on the word Genomegenics, his inflection sing-song.

Exchange that high blood pressure for high cheek bones. Change that nearsightedness to super-sight. Trade out that mediocre brain of yours for nothing short of Einstein’s. In a matter of minutes, you can go from drab to fab! All it takes is a simple call … Better yet, a visit to Genomegenics!

Wispy ringlets danced in the sky in a million different colors—some unrecognizable. Soft blue and majestic puffy cotton-balls filled the space behind it. A backdrop of celestial azure with a rainbow of circles aplenty curtaining atop. A single sphere of bright light swayed to and fro above it. A luminescent orb with a life of its own.

Eyes lucidly followed the orb and gazes became hypnotized by the labyrinthine magic of the lights. What was it? Never in written history did anyone ever witness the likes of this, and never would they in years to come. A once in a lifetime event for those lucky enough to see its splendor.

Camielle wasn't paying much mind to the lights like everyone else; her mind was fixed on the multitudes' reactions to the unknown. While some were amazed and enamored by the lights, others watched in fear—the uncharted always caused fear.

Inside of one configuration in particular grew binary globes. Side by side, blue and green, one larger, one smaller, but both equally pooling with vitality.

The awesomeness of Creation is in the magnificence of its perfection.

In the grand abyss of space and time, among the rotation of a solar system which blossomed from nothing, the Twin Planets rotated around themselves. An axis in precise alignment to one another. As the Twin Planets danced their intergalactic ballet—the larger of the two around the smaller—in conjunction, they also cavorted around the Source. Their brethren of celestial bodies in tow, forming a tail of ripples in the heliocentric system.

From these Twin Planets, Kab and Mangala, emerged existence. On Mangala grew beings with souls and intellect. On Kab grew reptilian gargoyles without understanding, who lived on instinct alone. While the evolution of all things took billions of years to develop, once the Pebble of Creation had completed its excursion, the final outcome was perfection.

Even at age thirty-five Vlad still had an affinity for antiquated things, including and not limited to television shows. With the advancements made in this era there was no need for them. The Regal Interweb was now the new fixation of mankind. The king of the Internet. No screen was needed, no CPU. All that was needed was your brain power and a microchip in your watch, and BAM! A screenless, splendor of fluorescent images that floated over your head like an opera of electrical charges, easily manipulated with your mind and fingers.

Vlad was not a fan of such things. One of his favorite things in fact was the long time archived clips of the History Channel's reruns of Ancient Aliens. Still the questions and theories that the show posed so many years ago seemed relevant, and more than that, plausible.

The more he watched the shows, although low quality televised definition—due to the low quality and obsolete nature of HD TV—the more he kept telling himself that they had to be right.

Especially, considering the new archaeological finds. Pieces of metal aviation devices were found hidden deep in the Mayan landscape. When compared, the artifact which resembled a Mayan king flying an aircraft, and the tiny gold airplanes they'd found in the remnants of a Pre-Inca civilization, it was fairly safe to believe that intelligent life had visited humanity in the remote past. Moreover, they’d laid the groundwork for said primitive civilization to survive. As a matter of fact, the engineering utilized to create the aircraft that Vlad and his colleagues were working on came directly from the fragments found.

Father Wind blew with a soft whistle; music was his talent. Such was his gift that if you looked closely you could see it swirling in the space around you. A nearby Sugar Maple tree felt the tickle of his breath and smiled. She loved the feather-like, soft stroke, and the feeling that it provided as it caressed her hard, brown bark.

There was something particularly enticing about this season. Every tree, that was any tree knew this.

People walked by, looking up at her abundant supply of orange, red and yellow leaves, admiring them. Children anxiously waited for them to fall from her old and stern branches so that they could jump in them and play.

To anyone, this would have been your average mid-October morning, had it not been for that single gust from Father Wind, which caused that sole Sugar Maple tree Leaf to come undone from its tethers. The breeze streamed by, titillating the old branch a little more profusely than it would have on any other occasion. It was that teeny, tiny, extra fragment of pressure that cause the resolutely affixed Leaf to dance the scantest bit more than it usually would.

So, you know all those sappy romantic comedies that us chicks seem to have a relentless, and dare I say, dangerous, affinity for? Those ones that show the quiet girl who is infatuated with the clueless guy. Yeah. Mhm. That's me.

For the longest time I called bullshit on those apparent misconceptions. I swore that females were not that damn gullible and would never fall for a guy that didn't even know she existed.

Damn, was I wrong!

Now, I'm feeding myself spoonfuls of the bullshit I called on them. Pathologically lying, overdramatic, unspecific, fairytale movies. That’s what I used to call them. Now, I am the main character in the real-life version of one. UGH! Why? Because of Ryan. Perfection in male form.

All right! Let's press the pause button for a minute.

Just because his name is Ryan, and I find him perfect, by no means implies that he's akin to Ryan Gossling or Ryan Reynolds. That's just terrifically unrealistic.

Okay. You may press play.

Hmm. Society's full of them.

Let's see. There's the always coveted “happily ever after.” Then there's “high school sweethearts” and the always great “love at first sight” and the very sentimental “We were meant to be.” Don't forget the great “meant for each other” and the ever famous and magical “We just knew!”

Fantastic. Excuse me while I scratch my throat in sarcasm and choke down the baby vomit. Mm mm.

Clichés. Yeah. Could they be any better? But, that's not real life. Real life isn't anything like that. Not one bit. Real life is totally the opposite—at least for me.


First there was Sam. The church boy raised by the perfect preacher parents. Say that five times fast. The best of examples to everyone, including me. He played the guitar in church, sang, preached, talked, motivated the youth ... Basically, he was a modern-day Moses, or some such nonsense.

Yeah. Mhm. All that.

Just imagine, if you will, the type of guy that every parent wants their daughter to be with. Prim, proper, happy, sweet, helpful to others, the grand inspiration. That was Sam. The absolution of perfection.