I absolutely love a good book release celebration!
So, in commemoration of C. Desert Rose's upcoming release "From Whence Jasmine Blooms." I have had her come visit my blog and talk a little bit about it.

Rose, the floor is all yours. 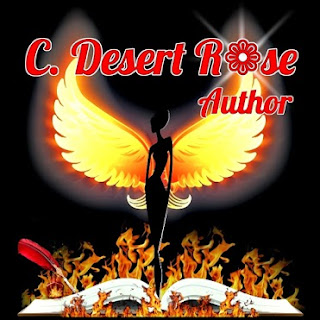 Since today marks the beginning of this blog tour as well as the cover reveal, I would like to talk a little bit about how I the idea and premise of "From Whence Jasmine Bloom" came.

One day I woke up with an image stuck in my head—I couldn’t shake it. The picture was vivid and it felt profound to me, as if it were tied to something that was on the cusp of being realized.
Some may call it a vision or revelation. Honestly, I’d be pushing the envelope too far if I said that it was divinely inspired, for I can’t say that with certainty. But one thing I can say with absoluteness is that I saw this depiction in my mind’s eye as clear as day.
That day I met with my publisher and her representatives and talked a little bit about this image I’d had stuck in my psyche. Immediately the graphic designer put pen to paper and perfectly duplicated the picture I’d seen. It was a flower laying atop a dark surface, but in the background was a transparent, hardly noticeable hourglass.
“Rose, what’s it for?” she asked.
“I have no idea.” I replied sincerely.
The VP interjected. “It’s for a story, obviously.”
“What story? I don’t have anything I am working, nothing outlines. Nothing.”
“You will.” she retorted assuredly.
“Um, okay. I guess.” saving the image I set all these thoughts side and continued on other things that I’d been working on.

Then I had a dream.

The night had fallen and in their quiet neighborhood crickets sang their evening tune. The wetness left behind from the night's prior rain fogged the windows slightly.
A pink pegasus with a unicorn horn and a rainbow mane picked her up at the sliding glass door located in the dining room. I already knew why she was there.
After a furious fight with my father at that very moment my brother helped calm me whilst sitting at the dining room table. With the corner of my eye I caught sight of the luminescence that alerted me of the pegasus' presence.
When I stepped outside I realized that I was not alone.
"Do you see this?" I asked my brother.
"Yeah." he responded, simultaneously flabbergasted and stupefied.
"So this isn't in my head ...?"
"Nope."
The pegasus neighed impatiently. A whimsical woman seated on the pegasus' back extended her hand towards me. "Come. We've got no time to waste. You have a long night ahead of you."
In that instance, from an indiscernible distance down glided another pegasus—this one with yellow fur—with two girls on her back.
In a state of disbelief I grabbed the angelic lady’s hand and mounted the creature.
"Come now ladies, prepare yourself for the flight. It may be a bit turbulent."
The girls on the second pegasus murmured amongst each other, chattering about the adventure that awaited them all. I said nothing.
With a nod of the head, the pegasus beat her front hooves, took a few leaps forward and just as simply ascended into the air.
Closely behind was the yellow pegasus.
Unmoved, and as if these things were an everyday occurrence, the magical lady spoke loud enough for everyone to hear. "Hold on tight!"
I gripped the lady's waste as hard as I could.
The lady spoke again. "My name is Amelia-Aurora. I was sent to get you. In approximately 50,000 feet you will feel a shift in your vision. You will no longer perceive things as a human. You will instantly obtain angelic vision and see things as we do."
"So ..." I gulped. "you are an angel?"
"Of course. What else would I be?"
I nodded. A second later, my vision went blurry, static and then refocused. Then the whole of the world was now painted in a hue that resembled night vision goggles.
"At this point your vision should have changed."
The girls on the second pegasus confirmed. I nodded again. "Ehem ... yeah."
"One thousand more feet and we'll traverse The Wall."
"'The Wall'?" Asked one of the girls.
"Yes, the clouds." Just as promised, in a matter of seconds we were floating amongst the clouds. Skillfully, Amelia-Aurora navigated the beast. We traversed The Wall and made it to the Heavenly Gates.

That’s when I woke up.

After several days of discussion with my fellow authors and under the impression that the story could be a contribution to an anthology I began to write it. In the story I supplemented myself for a character called Jasmine and as if by pure instinct the rest of the narrative just came to me. I wrote the entire story in the matter of a week.
A few days later the All Authors VP read a portion of the story and said, “There it is. The story that goes with the cover.”
She was right.
That was when “From Whence Jasmine Blooms” was born—a coming of age story of a girl on a time sensitive adventure to discover her purpose in the world. 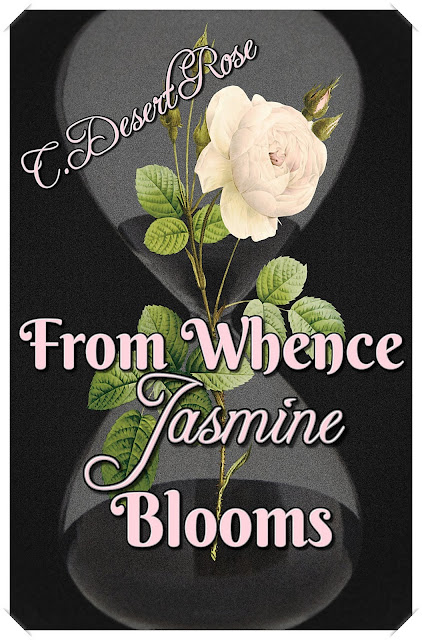