It’s been a long time in the waiting … almost a decade.

The question is, was it worth the wait?

We’ll let you be the judge.

For the first time ever, C. Desert Rose, in conjunction with All Authors Publishing House is proud to present you with the third book in the now dubbed Fate’s Endeavor Experience, “If Death Should Find Me”. 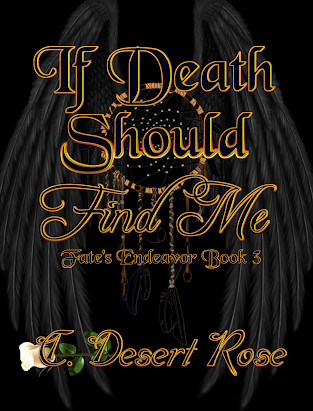 Azriel has always been an enigma amongst the Hierarchy of Angels. He was born a duality; human and not. Azirel, for centuries, has been appraised harshly by mankind. Nevertheless, death is of the natural order. All things that live must at some point, die. Azriel is the usher into transcendence.
Such was his purpose and the Higher Sources saw this to be good … yet, things change.
So begins the measure of Travis’ enterprise into the hands of fate. Due to the magnitude of his venture, Travis finds himself caught between life and death. Angels and demons surround him, attempting to influence the paradigm of his fate. The only question in Travis’ mind is, what would happen If Death Should Find Me?
The Fate's Endeavor Series, surpassing the emotional fabric of angels and demons and delving into the delicate threads which infuse Fate's tapestry.

Months Later
Rural Location, Earth
~ Travis ~
Who knows how much time had elapsed. Days, weeks, months, whatever …? I didn't know. Didn’t much care, either. But honestly, it felt like I'd been running forever.
Shortly after leaving my home, while on the road at some crazed point, I sawed off my cast. I couldn’t deal with the damn thing any longer. And, although the memory is a bit foggy, I can somewhat recall that it was in a grimy motel room in the middle of nowhere. My tool of choice was a rusty old hunting knife that had been sitting in my car for ages.
But that day, in that moment I thought to myself, If I am really a fucking angel, then I can probably fix my own damn leg and rib. Right? Right.
I took a deep breath—instantly my rib hurt. Regardless of that, I focused all of my energy onto healing my leg and rib. I put one hand on my broken leg, the other one on my chest.
I closed my eyes, kept breathing deep.
Suddenly, a strange warmth started exuding from my hands. It seeped into the areas I was trying to heal kind of like they were absorbing the energy or something. Out of nowhere, the rush of heat covered me entirely. I could feel it pulsating like a strobe light. Within seconds, I didn’t feel any more pain. It was all gone.
Opening my eyes, I immediately knew that I was better. I moved my leg. It didn’t hurt. I tapped my rib, that was fine too.
Well fuck, look at that—I guess I am an angel, I thought.

But wait, that’s not all!

For your reading pleasure, C. Desert Rose and All Authors Publishing House are also proud to share with you the newly improved “If Death Should Love Me”. 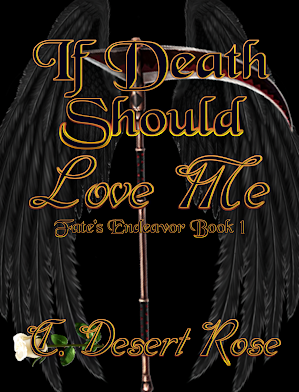 Azriel is appraised harshly by mankind. Humans do not like to face death, therefore, they conjecture it is an ugly and terrible thing. Death is of the natural order. All things that live, must at some point, die. Azriel is the usher into transcendence.
Such is his purpose and the Higher Sources saw this to be good … yet, things change.
A dull roar, that's all I could hear. Souls, that's all I could see... So many people. Some good, some bad. Some breathing, some barely breathing. All souls. It was funny what you could see when you stood in the middle of the Emergency Room. Who survived, who didn’t. All of them, every one, a soul. A soul for the taking.
So begins your introduction to the floating, clustered world of souls that will have such influence on Sophia, the young Puerto Rican-American girl who has just lost her closest ally, her grandmother, "Abuela". It is just after the funeral, at the cemetery, where Sophia meets the tall, almost angelic man who will play the most unexpected role in her life.
A love story. A fantasy. An adventure. If Death Should Love Me tells a tale of “fate” far beyond the normal meaning of that little four-letter word. How else would you explain why Sophia wonders what would happen If Death Should Love Me?

Bed two. The doctor, the running, the yelling. The focus on bringing her back, futile. It was incredibly sad to say that she was just a child. A baby. Five years of age. Why did “fate” find it necessary to take her? She had yet to even commence to live. It was not my choice. I merely followed orders.
Her soul was lovely, just like a little girl's should be. A soft pink. Like a princess, I mused. Beautiful.
"Come child." I extended my hand so that she would take it.
"Where am I going?" She asked. The innocence in her voice was heartbreaking. Or would be, if I had a heart.
"I'm taking you to a safe place. Somewhere where you will never feel pain again. You will be happy there, sweet child."
"Cindy," she said. "My name is Cindy."
"A beautiful name for a beautiful girl," Her smile seemed as though it could quite literally light up the room. "Well Cindy, do you see that very pretty light just there?" I pointed.
"Yes." She responded with bright eyes.
"Walk into it. Go on, child … Pretty Cindy."
"But why? Where's mommy and daddy? Why do I have to go?" There they were. The questions that always followed once I had collected them.
"Do not worry Cindy, your grandmother is there waiting for you. I promise," I assured her with a soft grip of the hand, then continued, "before you know it, mommy and daddy will be there also." What more could I say to such a young and delicate creature?
"Okay." She replied, not at all convinced that what I was telling her was the truth. She obeyed nonetheless. When she entered she realized that my words were true and secure.
"Nana!" She called with a magnitude of happiness, then ran into her grandmother's arms.
I turned.
The mother, yelling. The father, failing at his attempt to be strong. The doctor, saddened. The confusion. The horrified faces. All of it, all too familiar, all too real.
Time for my next assignment.