It has been quite some time since I brought you all a Cover Reveal. So, I am ecstatic to announce the Cover Reveal for a story that I have been working on for some time ... "Peter Blade".
Without further ado, here you have it! 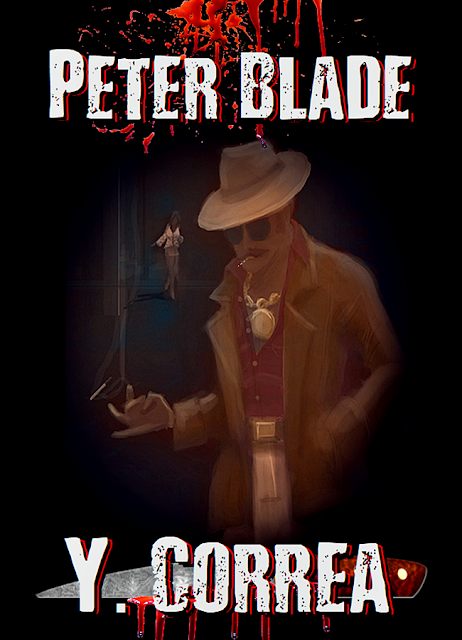 
“♫ Life gives you surprises but Surprises give you life, oh Lord ... ♪”


A single night can carry both contempt and horror.

The notorious Peter Blade is on the hunt … just like many nights before. Adhering to his father’s words, “You've got to get deep into the gut, that's how you'll be able to bleed the animal. It's the only way to get him clean ...” Peter ensures that every hooker he kills is bled to pristine flawlessness.

Dancing with the phantasms of a murky past and the reality of an ominous present, Peter Blade trades places with his victims for the foreboding remembrances which cometh after dark. This night is entrenched in the unexpected and Peter finds himself contending with life and death. From dusk to dawn, Peter Blade is inescapably haunted but to what end? Which could be worse, living the terror or dying by its hands?

Having taken Maribel out of the house, Fausto wrapped his uncle’s dead body in plastic bags and dragged him to the garage. Carefully Fausto tore the front of the bags open guaranteeing that when pulled apart they would remain under the body. Meticulously he covered the remaining area of the room with more plastic, assiduously safeguarding that spatter would drip on the plastic and not the surface underneath. Finally, Fausto covered himself in plastic bags.
As is normal for most Puerto Rican men Juan was not a tall man, standing at about five-foot-six, but he was on the thick side. His plump belly was the only part of Juan’s body that protruded the bags.
Like a pig, Fausto mused.
And like a pig Fausto handled him.
First, tying Juan by the feet with rope Fausto managed to dangle him head down from a beam in the garage. Immediately, after having hung his uncle's lifeless body, Fausto grabbed a large bucket and placed it directly under the body. This was a trick he’d learned years before by Juan himself during the sparse times when Juan helped Fausto’s father kill pigs.
Reaching for a machete Fausto held it high and looked at it intently. The shine and shimmer jumped off the blade like stars sparkling in a dark night’s sky.
She is my mistress, Fausto considered.
Words could hardly express the fulfillment this entire procedure gave Fausto. It was something along the lines of heaven on earth and soulful satiation. A place where real met surreal and completeness was attained.
A tingle of jubilee- No … of keen and satisfying captivity … ran up and down Fausto’s spine as he began the painstaking process of butchering the meat.
A jab deep in the gut, pulled upwards; then a slit from ear to ear across the throat.
Fausto’s eyes varnished and coiled with enchantment as the thick, warm, red broth leaked. All at once the gushing sonorous of rushing fluids banged against the bottom of the bucket. As the stream grew lesser the sound lulled to a trickle, then a pitter-patter.
Dreamlike, all of it. But this was no dream.
It was precisely this that mesmerized Fausto—the fantastic manner of it all. Enthralled by the technique therein, the methodical words echoed in his head. Those words that would remain encrypted like a red-hot, cast-iron brand in his cerebral cortex, “It's the only way to get him clean ...”
In so doing, Fausto bled the body dry.
Removing the bucket aside then untying the rope, the body dropped to the ground. The flop sounded like a captured and dead baby whale plopping atop the firmament of a boat. Slippery, strident and heavy all at once.
Next was the severing process. With every hack and jolt of Juan’s body, Fausto did not flinch. His countenance remained unwavering, transfixed.

Now Available for Pre-Order on Amazon Kindle!
on September 15, 2018