Y. Correa is a literary seductress, luring one in with her talent of Romancing the Words, keeping one hypnotized with dynamic characters, and stimulating one with engaging narrative voices, strong plots, and epic conflicts. Her writes are as complex and as distinct as her person; a delightful combination of eclectic and antiquated. Therefore, the mere mention of fitting into one set genre is laughable. The multi-genre decadence is where she showcases her magnificence.

Some of Y. Correa’s works include the Historical Fiction “MarcoAntonio & Amaryllis”,  the Sci-Fi Mashups “Earth 8-8-2: The Genesis Project” and "Earth 8-8-2: Genesis' Rebellion".  Also, the Paranormal Romance, "Lilith's Dominion" and a collection of various short stories which are available for free to the general public in a myriad of genres, from Erotica, to Comedy, to Hard Sci-Fi. Y. Correa has also had several of her works included in numerous Anthologies, some by All Authors and others by different publishers.

Finally, Ms. Correa is the Founder/Creator of All Authors Publications and Promotions whose subsidiaries are:

Would you like to enter into Y. Correa’s dimensions of literary seduction? Then simply connect with her on Facebook, Google+ or Twitter@YCorreaFB.

Earth 8-8-2 was the 882nd earth discovered by the scientists that ascertained alternated universes. One thousand had been found to date.

The Multiverse Theory had been proven and finally accepted by most earths.

As is typically the case, some earths refused to accept the findings. Each one had their independent reasons, most of the time that reason had something to do with religion. Nevertheless, said earths would stamp and seal their individual fates. Moreover, they would remain banal. Nothing was more upsetting than those who chose to remain ignorant.

Yet, that was an entirely different matter altogether.

What scientists proved was that the theory which implies our universe is not alone and that there are many universes existing parallel to each other, was correct. Each distinct universe within the Multiverse Theory was called a parallel universe—this thesis was distantly derived from String Theory and The Theory of Everything, which is the fundamental belief that implies that all things are connected.

There had been a variety of different conjectures that lent themselves to a multiverse viewpoint, however, one remained solid; there were more earths, universes and living beings that spread out to an innumerable amount of macrocosms. More than could be counted.

Each group of people from their own respective earth was referred to as their earth's number and the term 'earthling'.

Tyranny and malice swept through Earth 8-8-2 and people like Dr. Scott—or maybe not exactly like him—were looking for the means of freeing themselves from the brutality. Unbeknownst to their oppressors, several of The Rebellion had embarked on a mission to visit other earths in order to collect DNA. Many of the earths that had been visited had various types of living beings.

As is normal on any world, many of these fascinating beings had weaknesses—some were even quite peculiar—but a vast amount had breathtaking strengths. Their capabilities were far beyond that which 8-8-2 Earthlings, and any like them, could ever imagine.

Earth 7-0-1 was the residential abyss of vampires. These beings lived on a dark earth and fed on animals—beasts that were a hybrid of human and ape, although actual humans did not exist there. Dr. Scott surmised that if they had, they'd never survive. No blood on any earth was as good or as nutritious as human blood.

Earth 2-5-4 was the home to superhumans. Everyone was extraordinary; bestowed with supreme gifts. Therefore everyone was the same. It was an average day on Earth 2-5-4 when someone used their laser vision, or atomic breath.

Earth 9-9-1 was the dwelling of the gods. It was Mount Olympus and Asgard all rolled up into one. Yet, no one had an appreciation for one another's gifts as they were all the same.

Earth 8-8-2's Rebellion shipped scientists specializing in intergalactic travels to as many alternate earths as they could. The mission was to obtain DNA from all of the earths that were inhabited by supreme beings. As such, DNA was eventually gathered from Earths 7-0-1, 2-5-4 and 9-9-1. Albeit an extremely difficult mission, it was in the end, successful. 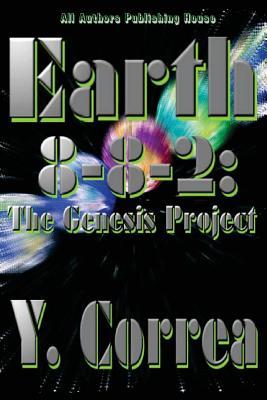 The beeping sound which resounded amidst the silence of the scarcely occupied room did nothing to alert anyone, for those there were already at attention. Endeavors such as these were bound to have an audience.

Acinom pushed a button then flipped a switch on the rotundus supercomputer which covered over half the wall and the sound ceased.

“Acinom,” called Doctor Belt, his voice raised, as though she were in another room, “check his pulse.” Acinom’s eyes shrank to slivers, the disdain of being yelled at pestered her.

“Yes, Doctor.” Acinom reached over, pushing another button which caused a spectacle of waves and numbers to appear on the computer screen in front of them. “Normal, Doctor.” she concluded.

Before any more hoopla could transpire, General Townsen trumped the tangible glee in the room, his voice filled with animosity. “How much longer before Experiment Eight-eight-two-dash-five-point-one is activated?” the dryness in his tone leaving much to be desired. Acinom frowned then squinted; chomping at the bit to put him in his place, although that was not necessarily her place.

Doctor Belt interjected, “Well Commander,” he walked towards the titanic, rectangular, transparent glass cistern which had a wide array of tubes and mechanisms affixed to it, and placed his hand on the glass, as though attempting to touch his creation. “It shouldn’t be much longer.” The gleam in Doctor Belt’s eyes was akin to a maniacal scientist basking in the glory of his creation—mad and euphoric. Doctor Belt pressed his forehead to the glass and shut his eyes, then released a long sigh of gratification.

Inside the immense vessel, attached to innumerable contraptions, floated the inanimate body of being liken to an Earth 8-8-2 man, but not.

General Townsen huffed his satisfaction, turned, pivoting like a soldier about to march, and left the room.

STAY TUNED FOR PART 3 OF THE